The goal of this sketch was to establish the x-y constraints for the puck (and later Players) moving around a Hockey rink.

This ended up being a fairly involved process, including one off-shoot exploration of geometry in: https://github.com/brianhonohan/sketchbook/pull/91

Some notes about my approach:

I’ll try to do a more in depth write but, here is the gist of the collision detection added in this PR:

If the Puck is in this areas, don’t need to perform any further checks or alter position or velocity.

But if the Puck is beyond the min X or Y, or max X or Y, then try to determine the board it hit.

This has two benefits:

Step 3 - Consider the corners to be open areas

This came through in two commits:

This was added through:

Step 5 - (Try to) Bounce the Puck off the corners

(Screenshot shows the incorrect calculation of the new Puck location … but the errors were different for each corner, with the bottom left corner being nearly perfect, so I new I was on the right path). 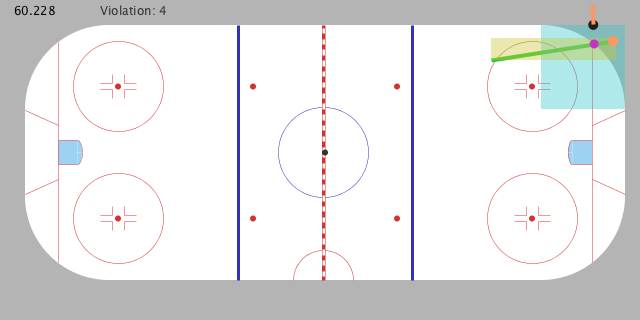 Eventually ironed out most of the bugs.

(I think there are other improvements to be made regarding collision points of end and side boards, but this is satisfactory for now).